Products
Back Products Concrete Cleanfill Roading Pavement Drainage Sand Sundry
Services
Back Services Labs Transport/Bulk Cartage Fill Sites
News About us
Back About us About Winstone Our promise to our people Working with us
Resources
Back Resources
Contact us Locations Get a Quote Credit Application
Thursday, February 27, 2020

The Symonds pit at Hunua quarry south of Auckland is a worthy example of a large Greenfields’ quarry development that took place in a relatively short space of time.

Hunua is Winstone Aggregates’ largest quarry and one of the top three by production volume in the country, running at around 3 million tonnes per annum.

A quarter of its output is taken by other Fletcher Building divisions including Firth Concrete while the rest is sold to external customers.

Winstone central operations manager Tim Hazell says that around 30 per cent of production from Hunua consists of premium products such as concrete aggregates, sealing chip and asphalt aggregates with the remainder constituting normal roading and construction fill-type materials.

The mine plan and earthworks programme that saw the wind-down of the old Hunua pit and the start-up of Symonds was an impressive one.

The company had to do this while maintaining production volumes and keeping the site safe. The existing pit was used as a cleanfill for early Symonds overburden stripping. “The transition to Symonds in terms of the fill and overburden dumping along the way was crucial,” says quarry process engineer Jonathan Laycock.

Mining at the old Hunua pit saw it taken down to RL 20 metres above sea level. Substantial fill work since has taken it up to RL80.

The new Symonds pit has already come down 110 metres and is currently at RL90, designed to go down to RL-5. To an observer this is already a large open-cast quarry. The total material volume taken from Symonds so far - rock sold plus overburden moved – is approximately 8 million bank cubic metres (equivalent to approximately 18 million tonnes).

Hazell says that pit design was key in opening up the resource and providing access to the different grades. The rock resource at Hunua is greywacke which the team then roughly defines in three groups of quality - weathered, moderately weathered, and premium rock.

Next year a big move will be the opening up of a western pushback from the Symonds pit, back towards the fixed plant area. 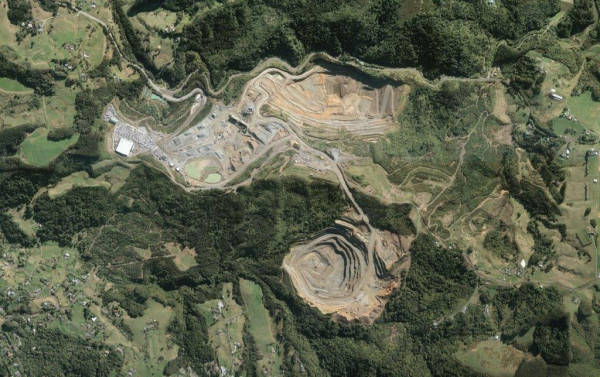 The old Hunua pit now operates as a commercial all-weather cleanfill as well as taking ongoing stripping from Symonds.

Hazell says the cleanfill commenced with a soft start and staging area two years ago. “It was then converted into a full ‘safe area’ engineered tip head so customer trucks can drive all the way in to drop off a load,” he says.

Other cleanfills tend to close over the wet winter as they can’t safely accommodate trucks. The roads have been developed at Hunua to provide an all-weather operation which Hazell says went really well last winter.

Winstone Aggregates general manager David Welsh says there is some back-loading at the cleanfill. “More importantly it is our same customers using the site for both rock and cleanfill, just not necessarily always in the same load.”

“Cleanfill volumes have been increasing over the last three years since it opened,” he says. “It now receives approximately half a million tonnes per annum.” 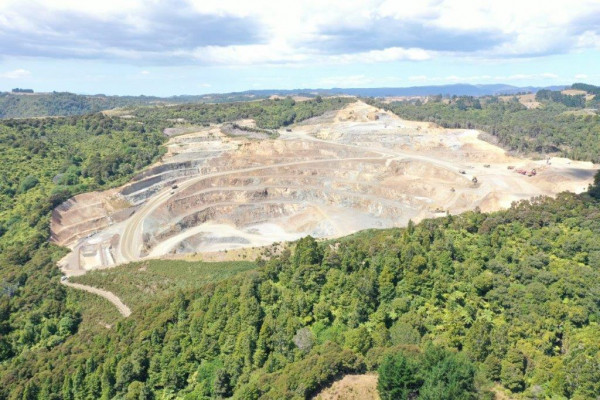 Welsh says customer service has been a big focus at Hunua.

The quarry – one of the busiest in the country - experiences up to 600 truck movements per day. “We’ve done a lot of work around optimising truck turnaround and service levels in general for our customers,” he says.

The company installed a third weighbridge and a sheeting bay for trucks which is located out of the main traffic flow to speed things up. “We’ve now got an 11-minute average truck turnaround time – weighbridge to weighbridge – this is a reduction,” Welsh says.

The company measures customer satisfaction scores which have improved at the site. Even separate toilets were installed for truck drivers. Hazell says that the sales staff do a lot of planning work to determine which products need to be made at any one point in time. “Sales and service staff start at 0600 while the whole quarry opens at 0500,” he says.

Welsh says that today’s mobile crushing equipment is a leap forward in terms of technology and operating efficiencies. “The flexibility we get with mobile plant means we can take constraints out of the fixed tertiary plant and make some of the high-end roading products to order, much faster,” he says. “These new mobile units are also much cheaper to run.”

The large fixed plant at Hunua runs 20 hours per day, closing for a short maintenance period. It is supported by a PAP wash plant which has been a real success according to Welsh, and a cement-treated basecourse plant. The laboratory operation runs 19.5 hours a day, six days a week.

The main production excavator at Hunua is a Komatsu PC 1250. This is supported by a fleet of 64-tonne CAT 775G dump trucks and CAT 980M wheel loaders.

Some lower grade crushing is done in the pit while most of the material is transported via the impressive 30-metre wide haul roads to the plant area.

Red Bull does all the blasting on site and BDC Engineering does maintenance. There are 40 staff at Hunua plus contractors.

Stay in the loop.
Sign up for our monthly news dispatch.

We love our trucks, our people, our community, sending messages for people to reach out …

Winstone Aggregates are proud sponsors of product from our Flat Top Quarry to help the Kaukapakapa community develop a playground completed in July 2020...

Every day at 4am, the Winstone Aggregate’s Belmont quarry fires up, getting ready to supply the booming demand for aggregate in the Wellington Region, which reaches an average monthly production rate of 70,000 tonnes...

We have a dedicated customer service team ready to help you find the products and services you’re looking for.